Writing, playing and touring, since his first release "Movement", featuring breakout songs "Runaways" and "My Heart Wasn't Ready", Kristopher has steadily solidified himself as a staple in the Florida music scene.
With his second release, 2016's Find Me EP, recorded at Burnt Orange Recordings in Bradenton, FL. , Kristopher not only expanded his music, from atmospheric soulful folk, to something with an Americana bite, but also branched out as an independent national touring artist.
From there, playing a consistent array of sold out shows at the iconic Eddie's Attic, to supporting Baton Rouge soul crooner, Marc Broussard, Kristopher has bloomed into a Americana Soulful force to be encountered. 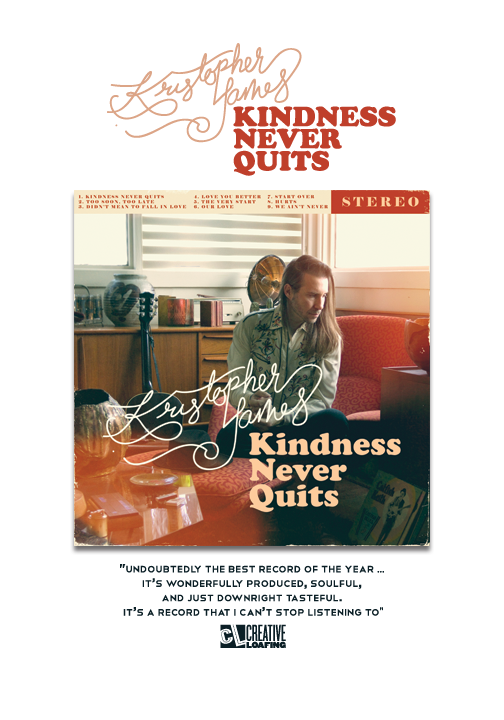 "Where have I been? This artist’s vocals are so powerful and as the song progresses, he showcases why he is one of the best singers out there. All that soul in one artist is just unbelievable." - Reignland

"Kristopher James can SANG. That’s not a typo. This guy can SANG. The amount of soul in this vocal is absolutely phenomenal. The overall production feels like it could have been recorded in Stax in the last 60s. The vibe feels legit and is something we are proud to support." - Ear To The Ground

"Kristopher James’s voice is powerful and immediate. He can belt, he can croon, he can really elevate a song with his delivery. His latest record, Kindness Never Quits, puts his voice front and center … takes a lot from classic Motown and Muscle Shoals and does so without being an imitation. This is the real deal." - Red Line Roots

“There’s a certain intoxicating majesty in his style and performance that marks the blooming songcraft of one of today’s most ambitious." - B-Sides & Badlands